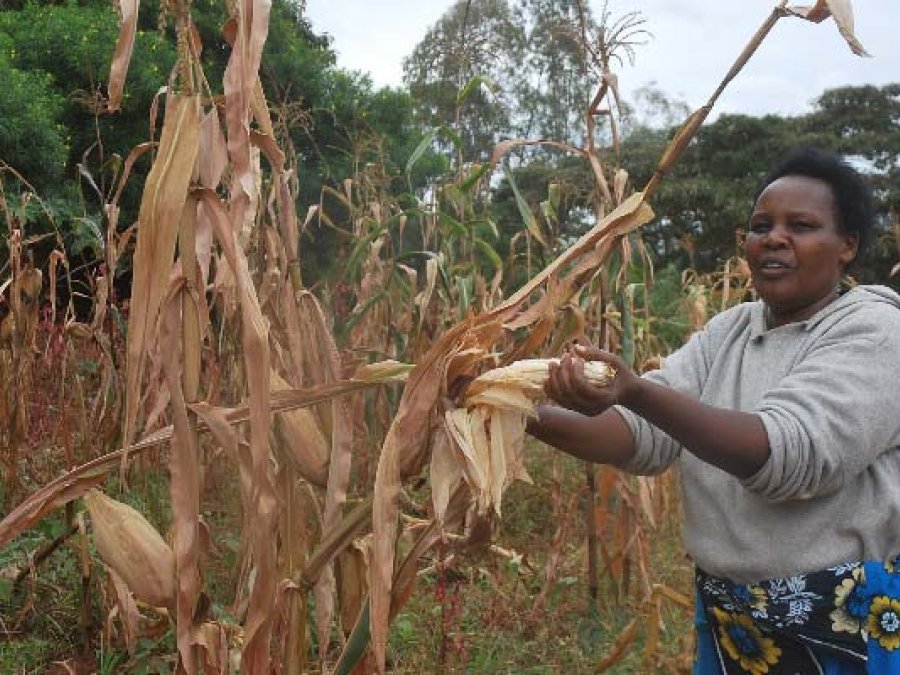 Sarah Nyamae a farmer from Kalimoni in Machakos county harvests maize in her farm.

For many years, farmers in Machakos had little to smile about during the harvest season but things have now changed, thanks to the adoption of improved drought resistant maize varieties.

Sarah Nyamae, a farmer from Kalimoni, says she had been planting maize using seeds from the past harvest and was not getting much.

“I used to get one to two bags from my one and a quarter acre piece of land but since I started planting the KDV4 variety, my yields have increased. This season, I got three bags from a three kilogramme packet of seeds and I am yet to finish harvesting,” says Nyamae.

Though she may not get enough for consumption and extra to sell, the mother of six is glad that she will get enough maize to sustain her family until the next harvesting season.

Nyamae says although she was sceptical and only planted the KDV4 improved seed in a small portion of land, the harvest has been good and she will plant in a wide area next season.

“Before I used to plant the local Kikamba maize variety and never got much. But with KDV4 variety, I am getting three times what I used to get. I always used to buy food since I could not harvest enough but this season is different. I plan to expand and plant more so that I am able to sell come next season. This was my first time to plant KDV4 and I am happy with what I have got,” she says.

Many farmers in the Eastern region are in the last week of harvest after the long rains between March and May.

Joseph Makau has also embraced the drought tolerant maize variety which, he says, takes between 72 and 75 days to mature.

“I have planted more than six different maize varieties including KDV4, drought tego and Sawa varieties and all of them are high yielding. I urge other farmers to embrace the drought resistant varieties in order to get better yields,” says Makau.

“It takes time to wean farmers off the local seeds they are used to despite poor yields. Though some farmers are aware of the existence of the improved drought tolerant varieties, they are yet to start planting them, and one reason they give for this is that the improved seeds are too expensive,” says Ngila.

The International Maize and Wheat Improvement Centre (CIMMYT) this year started a new Drought Tolerant Maize for Africa Seed Scaling project to work with seed companies in seven target countries in Sub-Saharan Africa including Kenya to increase both seed supply and demand by reaching as many farmers as possible.

Project leader Tsedeke Abate says it is not enough to just develop improved varieties, but also work to promote and distribute widely the released varieties to ensure farmers know, access and cultivate the seeds.

“As the harvest season ends in some areas, this is an opportune moment to highlight the plight of farmers in Kenya’s drylands and to sensitize them on the availability of certified improved seeds in the market,” Abate says.

He says accessing and planting certified drought-tolerant maize varieties and adhering to stipulated agronomic practices are key to securing the livelihoods of millions of farmers.

BMI Research, a UK-based agency that provides global markets analysis, estimates that Kenya’s maize production in 2014-2015 will be 2.9 million metric tonnes, while consumption is expected to be 3.8 million tonnes.

Consequently, the expected demand for imports is 900,000 tonnes. These grim statistics will most likely remain static in the coming years if concerted efforts are not made to sensitize farmers and increase adoption of the DT maize varieties in drought-prone regions. “CIMMYT has developed and tested excellent DT varieties over the last decade but the seed alone is not enough. Our goal now is to get production up and running through local seed companies, raise awareness among farmers and help them find and afford these new seeds,” says Kate Fehlenberg, DTMASS project manager.